For many decades of the long 19th century, the famous department store at 15 Celetná Street offered locals and visitors to Prague a wide selection of luxury goods.

According to the late 19th century guide, was “beautifully equipped…, had cellars and two floors. There are 50 gentlemen and 10 ladies employed in the store.

Led by August Goldschmid, the U města Paříže (To the City of Paris) store focused on Prague’s elite and first opened as a haberdashery store.

Immediately it became a hit, so he started adding more and more product types, divided into individual sections like modern shopping malls. Unfortunately the business did not survive and after the death of August’s son, Karel, the Bata company acquired the house, demolished it and built a functionalist shoe store instead.

At that time, the department store was the largest in Europe. In 1852, August Goldschmid “received” the shop as a wedding gift from his father. It offered a bit of everything – from groceries to pharmacies to household items.

August had an entrepreneurial mindset and decided to focus on one product line at a time. This is why he chose haberdashery as the only assortment to find a fixed clientele among the Prague elite. The haberdashery business was a success and, like his father, August began to add more and more products to the store, such as fans and theater glasses with jewellery. Then he added teas, herbs, toys, and home accessories like tables, statuettes, and other small items.

“He began to build what much later was called the department store of unity”, describes Rudolf Píša in his book Business stories. The store had two floors and a basement. Merchandise was divided into sections, according to type. Customers were served by 50 salesmen and 10 saleswomen.

In 1883 August’s son Karel became a partner in the business, and when his father retired Karel single-handedly ran a successful business.

At that time, advertisements for the department store already proclaimed it to be the largest such establishment on the continent, and it was said that not even Vienna, Berlin or Paris had such a store. Also, the department store on Celetná Street was very luxuriously furnished and resembled a palace rather than a boutique. Items were also delivered regularly, with up to 60 cases of new goods per day.

The best years of U města Paříže ended with the start of World War I. Although business picked up a bit after the war, it never regained its former glory. Moreover, Karel Goldschmid was single without children, so he had no one to pass on the shop to after the death of his brother.

In 1917 Karel made a deal with his associates and kept a small stake in the business, but the store was no longer operating, so he sold the building to Tomas Bata in 1926.

The building was replaced by a functionalist-style department store designed by Josef Gočár. 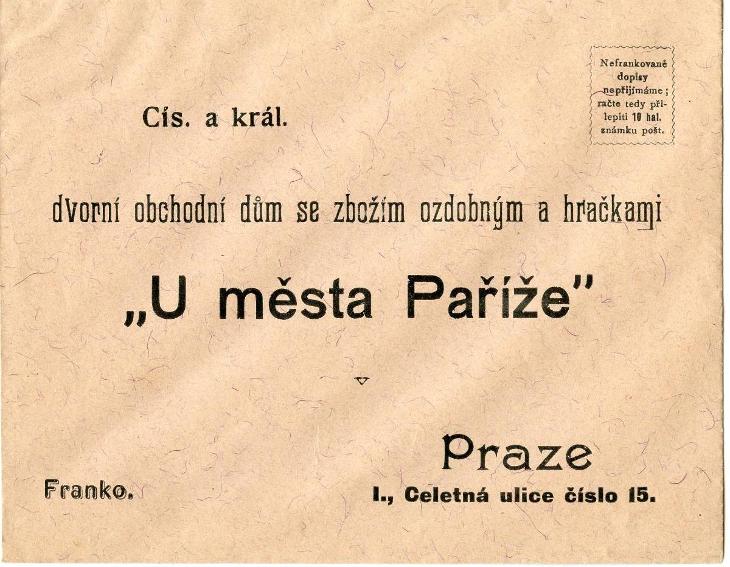